Now that Canonical has totally lost their way and turned the Ubuntu desktop into a pig's breakfast of inutility and ugliness (and that's only the beginning of their sins against a platform they thought had reached too great a height and decided to destroy), I've gone looking for something better and think I've found it...

...in Linux Mint. I've chosen (a bit arbitrarily since I haven't really experienced Mate) Cinnamon as the UI for my desktop.

So far, I've been very pleased with everything. Because of evolution in how Mint implements /etc/resolv.conf, I'm unable to get my employer's VPN running, but I've got other hardware still running Ubuntu Maverick and can use that until I'm able to deal with the problem. All my other productivity software is loaded and I've been running for a couple of days quite pleased so far. The installation wasn't too bad after over-coming a problem with the fact that I sit behind my employer's proxy.

What's nice is to come into a working desktop that appears unlikely to freeze the way my Ubuntu Precise desktop has almost since the day I installed it last December. Since then, I've had a couple of experiences with that platform and they've been mostly negative. I write software for a living; I don't know what's behind Canonical's insistence upon the Unity desktop nor some of the other changes they've made, but it's not helpful to my day-to-day productivity. Lucid/Maverick worked fine for me; Natty/Oneiric were pretty much just plain broken and Precise/Quantal were more stable, but demonstrated that Canonical was not going to give choices back to us.

Linux Mint is pretty much a "corrected" Ubuntu and, I hope, the awaited heir to Ubuntu's long-time superiority in the Linux world. Mint is apparently the fourth most popular desktop for home use (behind Windows, Macintosh and presumably Ubuntu, but that's changing fast by all reports). Actually, among Linux desktops, Mint is now the premier download.

I still run and am completely pleased with Precise server for all my server needs. I don't forsee changing that until Canonical releases their next LTS platform which, I hope, will continue to be dynamite.

I'll move to Mint at home as soon as I can juggle my hardware. Then, I'll move my web server from Lucid desktop to Precise and put the box over by my ESXi hardware. Fun times!
Posted by Russell Bateman at 8:39 AM No comments:

A trip down memory lane... 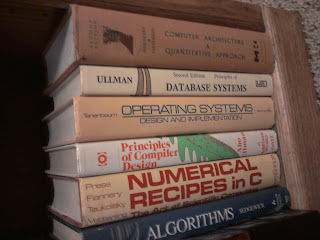 The other day, colleagues at the water fountain (virtually anyway, it was probably on the way back to the office from lunch) were reminiscing about CS classes back in school.

Craning my neck last evening at one point from what I was doing at my computer, I noticed that I've got precious few books left. I've kept these because they may still have relevance (or maybe not in some cases like Numerical Recipes in C and the other Algorithms book).

Still, it's hard to throw away books that cost me $50 or better 30 years ago because that was a veritable fortune in the day.
Posted by Russell Bateman at 6:47 AM No comments:

Email ThisBlogThis!Share to TwitterShare to FacebookShare to Pinterest
Labels: Books 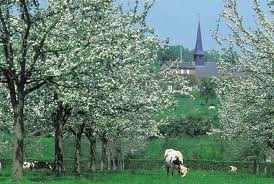 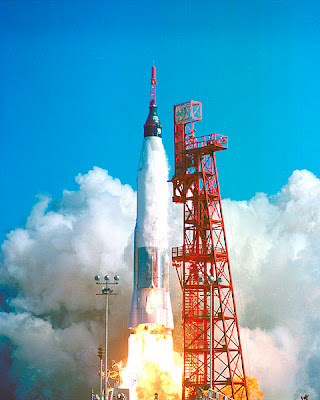 When I was in my 20s, I worked on computer software to translate from one language to another. It was pretty fun stuff I thought, very hard to show you now how much fun it was as there's nothing left of it—and no pictures. Besides, it didn't really ever work.

But when my father was in his 20s, he was an electrical engineer and worked at the General Dynamics Corporation in San Diego with other engineers to build this rocket. This is a picture of it taking astronaut John Glenn, who passed away last year, into the first manned orbit by an American (1962).

I probably don't need to point out which is a cooler thing to have done in one's 20s.
Posted by Russell Bateman at 2:41 PM No comments:

Here's an idea: Why don't we just fire the entire Ubuntu staff? That way, they could go off to the Macintosh feeling guilt-free. It's a good home and a stable environment unlike the pig's breakfast they've made of Ubuntu Linux.

Or, we could be lenient. We could administer an oath to those who wish to remain:

"I hearby swear that I will do my best to disentangle Ubuntu from any notion of Unity, restore Gnome goodness, return Ubuntu to stability and resist with my very life, if necessary, any return to anything approximating Unity. I will restore to full working status and option all software that worked prior to Ubuntu Oneiric.

"I recognize that Ubuntu is a desktop platform used by many, but most especially, by software engineers whose delight is accomplishing productive work with the minimum of intrusion by experimental fantasies in unproven and cumbersome graphical user interfaces.

"I will furthermore return the window title bar controls to the right side leaving their relocation on the left side merely as an option and I will resist all further 'Macintosh wanna-be inspiration or temptation'.

"So swear I for myself and for all my descendants."

Otherwise, it's off to Mint for me.
Posted by Russell Bateman at 9:40 AM No comments:

A boy and his erector set 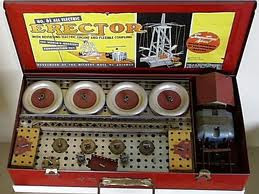 This week parts of my fifth erector set have been arriving. To the right here is a picture I found out there of my first set, which I dearly loved of everything Santa Claus ever brought me and with which I built all sorts of cool things. It was a pretty dangerous toy: if you put your finger into the gearing of the motor power take-off box, you'd get it seriously shredded.

You can't buy such a thing anymore, but the whole concept has been handily replaced by a different sort of erector set. I'm on my fourth, it's called parts for a computer.

Indeed, as soon as the last piece, the case, arrives next week, I'll assemble a new computer designed to replace my web server (eventually) and serve as a platform for me to cement my understanding of managing a professional data center using VMware vSphere to manage the virtual machines (VMs) I will create. Each VM is in fact a virtual computer host that behaves as if separate from its siblings. So, it's like one great big computer masquerading as several, separate ones. I'll also be using software called Chef to manage what ultimately populates any VM I create with software. It's more or less a tiny part of what I do at work.

For example, my brother has such a set-up in which he uses separate VMs to be 1) a PBX (telephone exchange system), 2) a network router, 3) and one or two other things at home.

My usage will be 1) my primary web server, 2) one or more applications running on Tomcat on separate VMs and 3) a set of MongoDB database replica nodes consumed by those applications.

Below, in conch-shell order beginning with the big, black power supply at top left: DVD drive, two 2Tb hard disks that will be put into a RAID 0 configuration (if VMware will support that), the motherboard, the CPU fan, the Intel i5-2500K quad core CPU clocked at a stock 3.3GHz, a scrap of metal to put over the connectors on the back plane, two 8Gb DIMM memory sticks, an orange SATA cable, two black SATA cables, a small package of screws and a utility knife (for opening packages or for my wrists if things don't go well—all depending). 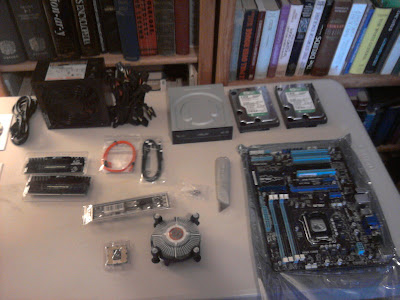 I began putting a period to a blessed life pre-Unity today at work as I relegated my primary development host, running Ubuntu Maverick Meerkat, to second fiddle while I picked up and am now playing (identical HP hardware) on Precise Pangolin with Unity (12.04LTS).

I really do not like Unity as compared to Gnome. I develop software and I can't see how using Unity helps me do that better than using Gnome. Mostly, it gets in my way.

And chasing Unity off and restoring Gnome isn't fun and easy, nor was it altogether successful the time I tried it last November. I don't just want Gnome, mind you, I want it exactly how I've had it and I could not reach that point in the few hours I allotted to the experiment. I also don't want to have to hack every new OS I install, so before fleeing Ubuntu altogether, I'm going to see how badly my productivity is afflicted by Unity.

So here I am with about half my crucial development tools running on the newer operating system and the ones that don't still running under Maverick. Principally, I can't get Remmina to work and I need it to replace tsclient. I'm also struggling with Thunderbird in some ways. Today I finally got it set up to do my HP mail, but then it refused to do my personal mail.

At home I'm going to be undertaking much the same journey if with less angst about how fast and well it works.

Posted by Russell Bateman at 6:29 PM No comments: